What you need to know about Milia

Milia, or milium cyst in singular, is a skin condition characterised by small white-yellow bumps that generally appear on the cheeks, below the eyes, and on the nose. The small cysts appear clustered in groups and occur as a result of entrapment of keratin typically found in skin cells, nail cells and at the root of the hair follicles. Most often than not, people tend to confuse it with Epstein pearls. However, Epstein pearls – categorised as harmless- usually involve the appearance of white-yellow cysts which tend to appear on the gums and mouth of newborns.

Do you have Milia (Small white spots on your face that you would like removed?)

Below are the four common types of Milia classified according to the nature of their cause and the ages mostly affected;

Neonatal milia are what some people may commonly refer to as ‘baby acne’ because most newborns are born with it. More so, a study by the Stanford School of Medicine reports that this type has a 40% chance of occurrence in infants. Its cysts can be seen on the scalp, upper torso and face of the newborn. However, the fortunate thing is that it may disappear after some weeks even without treatment.

This is the trapped keratin under the skin surface where cysts are formed on the forehead, eyelids and even the genitalia. It occurs in both children and adults and can last either for a short period or can remain for a very long time which should prompt you to seek medical attention.

This type is commonly associated with autoimmune or genetic disorders of the skin such as lichen planus and discoid lupus. This condition also affects the eyelids, jaw, cheeks and the ears with a single cyst having a diameter of a few centimetres. Although it ordinarily occurs in women who are of middle age, it may also occur in men and children. 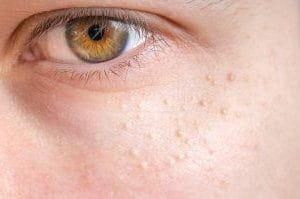 Do you have these small white spots on your face?

Most studies show that a number of reasons can cause Milia that is developed during adulthood. Below are some of the common causes;

The use of heavy skin care products for skin smothering as well as other hair care compounds has been highlighted as one of the major causes of Milia in adulthood and more specifically in women. You should be very careful when using makeup removers because research shows that some typical comedogenic lotions and creams can inhibit sloughing off of dead epidermal cells hence causing this condition. In addition, heavy sunscreens, hair gel and mousse, hair spray as well as moisturisers have been known to cause the condition.

Another cause has been related to the prolonged sun damage of the skin due to cumulative exposure to the sun. Additionally, an ageing skin tends to form a thicker epidermis which makes it difficult for the natural exfoliation of hair follicles and skin cells from finding their way out of the glands.

Other typical causes could be,

Generally, anyone who has a predisposition to the causes described above will tend to be more susceptible to the condition.

Signs, Symptoms and Treatment of Milia

The signs and symptoms are easily detectable with the common signs including dome-shaped white –yellow bumps that are neither itchy nor painful. In addition, the small bumps or cysts are mostly located on the eyelids, nose, cheeks and forehead. In most cases, infant Milia don’t need any treatment since the condition disappears after a short while. The Milia in adults and older children that doesn’t disappear can be treated using various techniques such as; topical retinoids, using a sterile needle to remove the cysts, chemical peels, destroying the cysts by extreme heat(diathermy), laser ablation, Cryotherapy and surgical cauterisation and scrapping used to destroy the cysts. Your doctor can inspect your skin for signs of Milia to be able to prescribe the appropriate medication.

At BeauSynergy beauty and skin care Hertfordshire clinic, Milia can be removed using the Thermavein system. The treatment is spot-on, painless and does not produce any scarring or changes to the skin pigmentation. 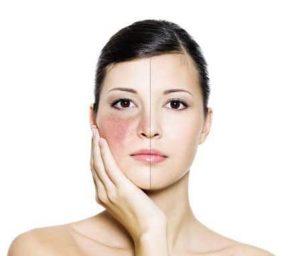 Milia, a condition that has for so long been considered normal especially in newborns, can be quite unsightly if it spreads to most parts of the face. It disrupts and distorts the natural skin texture and complexion hence the need to get it removed. Pay a visit to BeauSynergy skin care clinic and enjoy their services for the removal of Milia at affordable costs.

View all our range of Skin Treatments in Hertfordshire

END_OF_DOCUMENT_TOKEN_TO_BE_REPLACED

END_OF_DOCUMENT_TOKEN_TO_BE_REPLACED
Manage Cookie Consent
To provide the best experiences, we use technologies like cookies to store and/or access device information. Consenting to these technologies will allow us to process data such as browsing behaviour or unique IDs on this site. Not consenting or withdrawing consent, may adversely affect certain features and functions.
Manage options Manage services Manage vendors Read more about these purposes
View preferences
{title} {title} {title}