An in-depth Overview of Thread Veins; Causes and Treatments
29 September 2021

Most holiday makers who avoid the beaches or public swimming pools do so for a very good reason. This is primarily due to a condition on their skin which does not give an appealing appearance. This condition is commonly referred to as thread veins. Here we talk about thread veins causes and treatments.

Scientifically, however, thread veins whose scientific name is Telangiectasia, is a condition characterized by tiny blood vessels that run proximally to the skin surface with a purplish or red appearance. Thread veins are also commonly known as spider veins or broken veins.

Who is susceptible to Thread Veins

Spider veins affect nearly all of us as we hit our senior years. More specifically, the condition affects nearly one in every five women who are in their 20’s. This value apparently doubles for women in their 40’s, and the older the ladies get, the higher the risks of getting the thread veins skin condition.

Nearly all women over the age of 70 will have some forms of thread veins. Therefore, it is imperative to start treating the condition at its onset instead of waiting for it to grow roots where it becomes stubbornly difficult to treat. 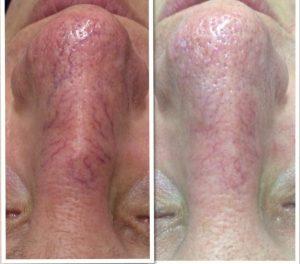 Although there is no obvious cause for this condition, it tends to manifest with age. This is when your blood vessels and your skin become less elastic.

The development of thread veins has been heavily linked to pregnancy and menopause hormones and hence the reason for the prevalence of the condition in women more than in men.

Hereditary factors can also lead to thread veins in addition to sunbathing, corticosteroid, prolonged exposure to extreme windy conditions, radiotherapy and extreme temperatures. Other factors such as occupation, obesity, and liver disease have not been directly linked to the development of thread veins, but they have shown to aggravate the condition once you get it. 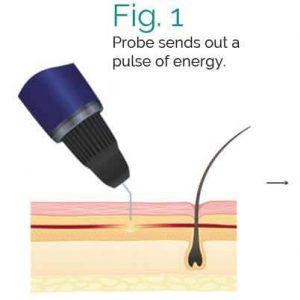 How can you Treat Thread Veins?

Thread veins are most commonly visible in the face when they are prevalent in the nose or the cheeks. These tiny spider-like threads can also be seen on the ears and the chin. Although harmless, this condition can negatively affect your self-esteem when it develops to cover large parts of your face. This is why it is recommendable to seek treatment for broken or thread veins.

Several treatments are provided for thread veins. The three commonly known treatments are sclerotherapy, laser treatment and surgery and the use of support stockings.

It is now very easy to treat and get rid of thread veins, thanks to BeauSynergy advanced Thermavein facial thread vein removal system. Once you reach out to BeauSynergy, the expert professionals will determine thread vein manifestation on your body and face.

The ThermaVein facial telangiectasia removal is a quick and efficient system. The treatment makes use of high-frequency bursts that are passed through a tiny needle. The generated current then seals off the spider vein allowing the body to get rid of it naturally.

Thread veins are prevalent conditions which many of us leave untreated. The reason for such poor decisions relies upon the fact there are many myths and misconceptions about the condition. This has led to many people suspecting the effectiveness of the available treatments. However, this doesn’t have to be the case. BeauSynergy’s Thermavein is a sure way to get rid of this condition completely.

BeauSynergy are the leading skin clinic in Hertfordshire for the removal of facial thread veins using Thermavein. It is quick, affordable and minimal after-effects.

END_OF_DOCUMENT_TOKEN_TO_BE_REPLACED

END_OF_DOCUMENT_TOKEN_TO_BE_REPLACED
Manage Cookie Consent
To provide the best experiences, we use technologies like cookies to store and/or access device information. Consenting to these technologies will allow us to process data such as browsing behaviour or unique IDs on this site. Not consenting or withdrawing consent, may adversely affect certain features and functions.
Manage options Manage services Manage vendors Read more about these purposes
View preferences
{title} {title} {title}